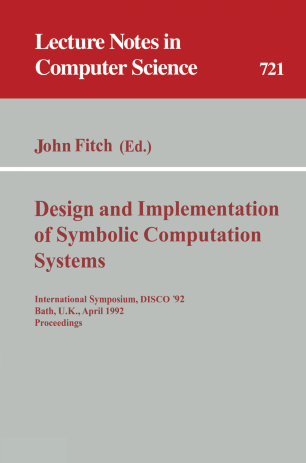 DISCO 92 was held on the Newton Park campus of Bath College of Higher Education, England, April 13-15, 1992. Beside the formal lectures dedicated to design and implementation issues of computer algebra, there were several software demonstrations and an opportunity for system designers to compare systems. This volume presents the proceedings of the conference. It contains 18 papers on a variety of design and implementation issues. One general theme which clearly emerges is the need for interconnections between systems, as no one systems incorporates all the facilities that users want. Various effortsare being made to design such links, but generally in limited contexts (suchas the Maple project or the Posso project).