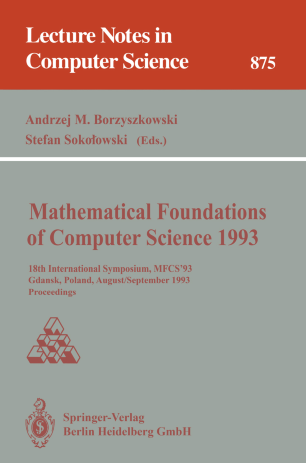 This volume contains the proceedings of the 18th International Symposium on Mathematical Foundations of Computer Science, MFCS '93, held in Gdansk, Poland, August-September 1993. The MFCS symposia, organized annually in Poland and the former Czechoslovakia since 1972, have a long and well-established tradition. Over the years they have served as a meeting ground for specialists from all branches of theoretical computer science, in particular - algorithms and complexity, automata theory and theory of languages, - concurrent, distributed and real-time systems, - the theory of functional, logic and object-oriented programming, - lambda calculus and type theory, - semantics and logics of programs, and others. The volume contains 12 invitedlectures and 56 contributed papers selected from 133 submissions.