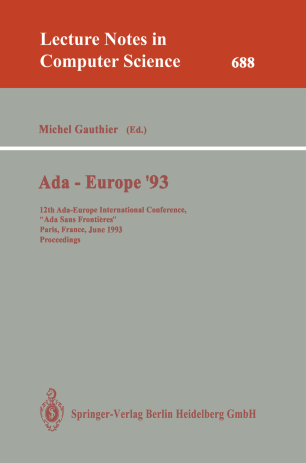 This volume contains the proceedings of the twelfth Ada-Europe conference, held in France in 1993. The French name "Ada sans fronti res" (the only French words in the book) symbolizes the unlimitedness and novelty of Ada, as well as Europe-wide interest. Many papers relate to Ada-9X, the new standard that the Ada coimmunity is close to achieving after worldwide consultation and debate about requirements, specification, anddetailed definition. Their focus is on management, real-time, and compiler validation. Part of the conference was on object orientation, together with various issues relating to the general structure of the language, including exceptions to a certain use of genericity and heterogeneous data, efficiency, formal requirements and CASEs, and comparison with a competitor language. A third part relates to real-time, past with performance measurement, present with certification andapplications, and future with the ExTRA project and 9X.