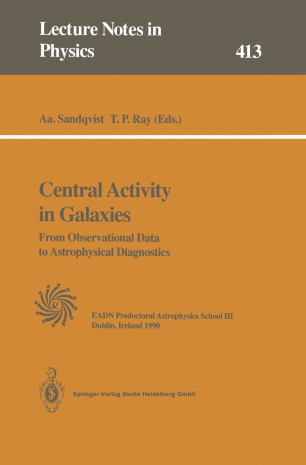 From Observational Data to Astrophysical Diagnostics

This outstanding collection of surveys addresses graduate and predoctoral students. It reports on theoretical research and observational data on active galactic nuclei: The enigma of the nuclei of galaxies with their central "monster" driving the vast range of activity observed in quasars, radio galaxies, Seyferts, starburst galaxies and even our own Galaxy are explored in this volume. Topics covered include: the impact of recent measurements in the infrared and radio region on our knowledge of thenucleus of our Galaxy; the spectra and classification of active galactic nuclei, the properties of their host galaxies, their cosmological distribution and evolution, the role of stars and thehydrodynamics of the interstellar medium in the nuclei; the description of the inner parsec of a standard active galactic nucleus based on direct interpretation of the observations; the infrared activity of galaxies; the physics of radio galaxies and their jets, emphasizing the physics ofgas flow and high-energy particle interactions as well as shock acceleration. These are all discussed in considerable depth and presented inself-contained chapters with exhaustive reference lists of the scientific literature.