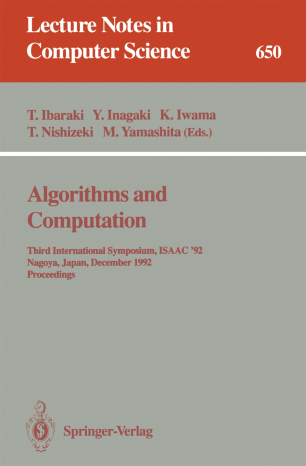 This volume gives the proceedings of ISAAC '92, the Third International Symposium on Algorithms and Computation, held in Nagoya, Japan, December 1992. The first symposium was held in Tokyo in 1990, as the first international symposium organized by SIGAL (Special Interest Groupon Algorithms in the Information Processing Society of Japan) to serve as anannual international forum in Asia for researchers in the area of algorithms. The second symposium was held in Taipei, Taiwan in 1991, where it was decided that computation would be included in the main scope of the symposium and that ISAAC would be its name. ISAAC '92 focuses on topics in design and analysis of algorithms, computational complexity, and theory of computation, including algorithms and data structures, parallel/distributed computing, automata and formal languages, probabilistic/approximation algorithms, computability and complexity, term rewriting systems, and computational geometry. The volume contains the accepted contributed papers and the invited papers.