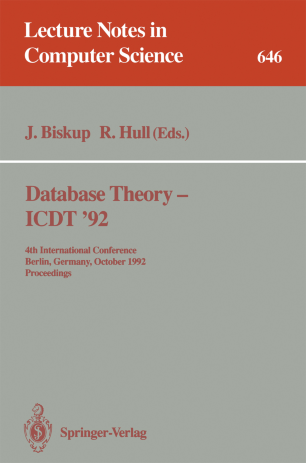 The papers in this volume were presented at the International Conference on Database Theory, held in Berlin, Germany, October 14-16, 1992. This conference initiated the merger of two series of conferences on theoretical aspects of databases that were formed in parallel by different scientific communities in Europe. The first series was known as the International Conference on Database Theory and the second as the Symposium on Mathematical Fundamentals of Database Systems. In the future, ICDT will be organized every two years, alternating with the more practically oriented series of conferences on Extending Database Technology (EDBT). The volume contains 3 invited lectures and 26 contributed papers selected from a total of 107 submissions. The papers are organized into sections on constraints and decomposition, query languages, updates and active databases, concurrency control and recovery, knowledge bases, datalog complexity and optimization, object orientation, information capacity and security, and data structures and algorithms. Two of the invited papers survey research into theoretical database issues done in Eastern Europe during the past decade.