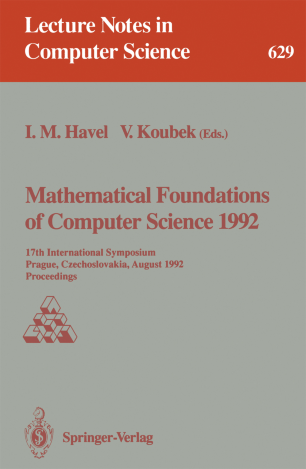 This volume contains 10 invited papers and 40 short communications contributed for presentation at the 17th Symposium on Mathematical Foundations of Computer Science, held in Prague, Czechoslovakia, August 24-28, 1992. The series of MFCS symposia, organized alternately in Poland and Czechoslovakia since 1972, has a long and well established tradition. The purpose of the series is to encourage high-quality research in all branches of theoretical computer science and to bring together specialists working actively in the area. Numerous topics are covered in this volume. The invited papers cover: range searching with semialgebraic sets, graph layout problems, parallel recognition and ranking of context-free languages, expansion of combinatorial polytopes, neural networks and complexity theory, theory of computation over stream algebras, methods in parallel algorithms, the complexity of small descriptions, weak parallel machines, and the complexity of graph connectivity.