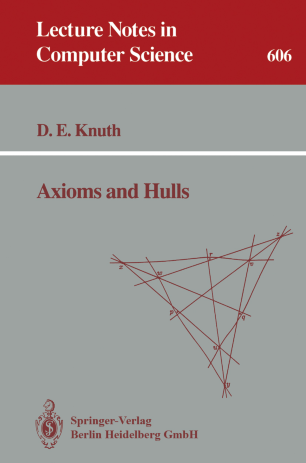 One way to advance the science of computational geometry is to make a comprehensive study of fundamental operations that are used in many different algorithms. This monograph attempts such an investigation in the case of two basic predicates: the counterclockwise relation pqr, which states that the circle through points (p, q, r) is traversed counterclockwise when we encounter the points in cyclic order p, q, r, p,...; and the incircle relation pqrs, which states that s lies inside that circle if pqr is true, or outside that circle if pqr is false. The author, Donald Knuth, is one of the greatest computer scientists of our time. A few years ago, he and some of his students were looking at amap that pinpointed the locations of about 100 cities. They asked, "Which ofthese cities are neighbors of each other?" They knew intuitively that some pairs of cities were neighbors and some were not; they wanted to find a formal mathematical characterization that would match their intuition.This monograph is the result.