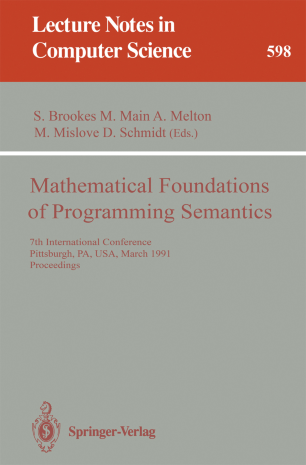 This volume contains the proceedings of the Seventh International Conferenceon the Mathematical Foundations of Programming Semantics, held at Carnegie Mellon University, March 1991. The conference continued a series of annual meetings, alternating between workshop and conference formats, intended to bring together computer scientists and mathematicians for discussion of research problems, results and directions in programming language semantics and related areas. A major goalof the series is to improve communication and interaction between researchers in these areas and to establish ties between related areas of research. The volume contains revised and refereed versions of each of the contributed papers and refereed papers by three invited speakers:Jon Barwise, John Reynolds, and Mitchell Wand.