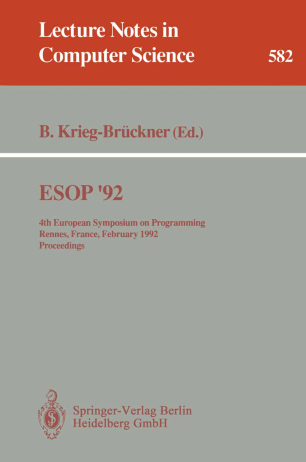 This volume contains selected papers presented at the European Symposium on Programming (ESOP) held jointly with the seventeeth Colloquium on Trees in Algebra and Programming (CAAP) in Rennes, France, February 26-28, 1992 (the proceedings of CAAP appear in LNCS 581). The previous symposiawere held in France, Germany, and Denmark. Every even year, as in 1992, CAAPis held jointly with ESOP. ESOP addresses fundamental issues and important developments in the specification and implementation of programming languages and systems. It continues lines begun in France and Germany under the names "Colloque sur la Programmation" and the GI workshop on "Programmiersprachen und Programmentwicklung". The programme committee received 71 submissions, from which 28 have been selected for inclusion in this volume.