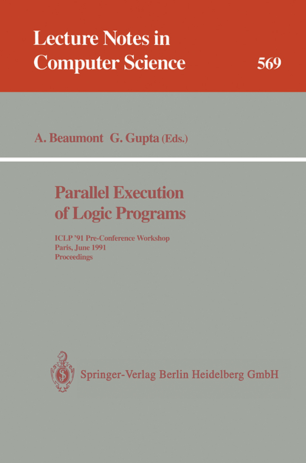 Logic programming refers to execution of programs written in Horn logic. Among the advantages of this style of programming are its simple declarativeand procedural semantics, high expressive power and inherent nondeterminism. The papers included in this volume were presented at the Workshop on Parallel Logic Programming held in Paris on June 24, 1991, as part of the 8th International Conference on Logic Programming. The papers represent the state of the art in parallel logic programming, and report the current research in this area, including many new results. The three essential issues in parallel execution of logic programs which the papers address are: - Which form(s) of parallelism (or-parallelism, and-parallelism, stream parallelism, data-parallelism, etc.) will be exploited? - Will parallelism be explicitly programmed by programmers, or will it be exploited implicitly without their help? - Which target parallel architecture will the logic program(s) run on?