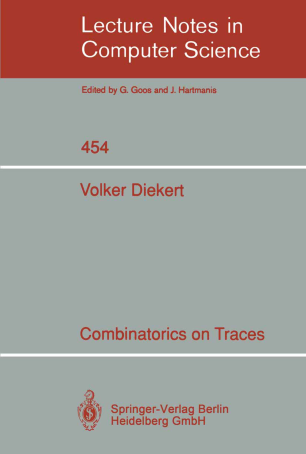 Parallelism or concurrency is one of the fundamental concepts in computer science. But in spite of its importance, theoretical methods to handle concurrency are not yet sufficiently developed. This volume presents a comprehensive study of Mazurkiewicz' trace theory from an algebraic-combinatorial point of view. This theory is recognized as an important tool for a rigorous mathematical treatment of concurrent systems. The volume covers several different research areas, and contains not only known results but also various new results published nowhere else. Chapter 1 introduces basic concepts. Chapter 2 gives a straight path to Ochmanski's characterization of recognizable trace languages and to Zielonka's theory of asynchronous automata. Chapter 3 applies the theory of traces to Petri nets. A kind of morphism between nets is introduced which generalizes the concept of synchronization. Chapter 4 provides a new bridge between the theory of string rewriting and formal power series. Chapter 5 is an introduction to a combinatorial theory of rewriting on traces which can be used as an abstract calculus for transforming concurrent processes.