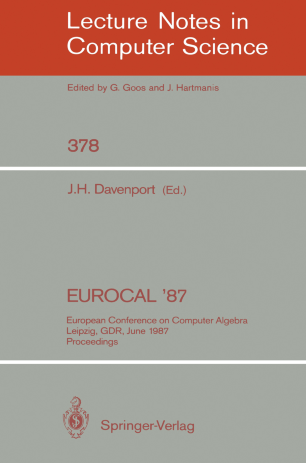 This is the sixth in a series of conference proceedings of international conferences on computer algebra held in Europe. All the preceding ones have also been published as Lecture Notes in Computer Science. They contain original research material not published elsewhere, and a few invited lectures summarising the state of the art. Computer algebra is the science of using computers to do algebraic calculations, rather than the purely arithmetic calculations which we all know computers can do. These calculations may be polynomial-like calculations - one thread of the conference was devoted to polynomial algorithms - or may relate to other areas of mathematics such as integration, the solution of differential equations, or geometry - a second thread was devoted to those topics. The calculations can be applied in a wide range of scientific and engineering subjects, and in branches of mathematics. Physics has benefitted especially from these calculations, and the proceedings contain many papers on this, and also papers on applications in computer aided design and robotics, to name but a few other applications. The third thread of the proceedings was devoted to these applications and to the computer algebra systems which perform these calculations.