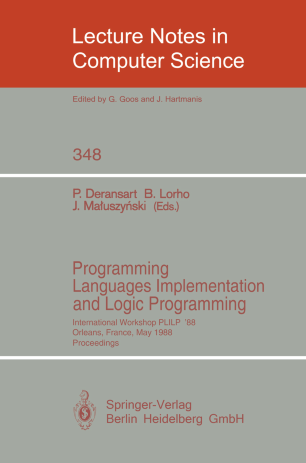 The aim of the workshop was to discuss whether research on implementation of programming languages and research on logic programming can mutually benefit from each others results. The intention was to bring together researchers from both fields, especially those working in the area of their intersection. Problems such as formal specification of compilers and syntax-based editors, program analysis and program optimization have been traditionally studied by implementors of algorithmic languages and have resulted in a number of well-established notions, formalisms and techniques. At the same time, an increasing number of people use logic programming as a way of specifying compilers or other programming environment tools, taking advantage of the relatively high level of logic programming and the growing efficiency of Prolog implementations. On the other hand, research on logic programming raises the questions of analysis of logic programs and their optimization. These are motivated primarily by compiler construction for logic programs, by studies on the methodology of logic programming and by the attempts to amalgamate logic programming and functional programming. The purpose of the workshop is to review the techniques developed in one (or both) of the fields which could also be of some help in the other one and to facilitate the transfer of expertise. It seems important to compare notions used in both fields: showing similarities between them may prevent rediscovering results already known, while studying differences may contribute to the transfer of technology.