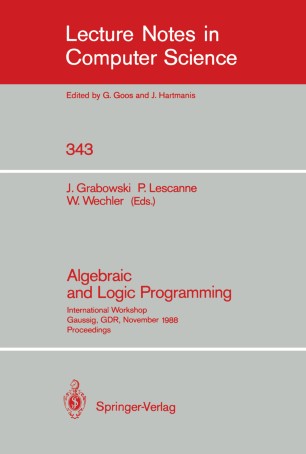 This volume contains the proceedings of the First International Workshop on Algebraic and Logic Programming held in Gaussig (German Democratic Republic) from November 14 to 18, 1988. The workshop was devoted to Algebraic Programming, in the sense of programming by algebraic specifications and rewrite rule systems, and Logic Programming, in the sense of Horn clause specifications and resolution systems. This includes combined algebraic/logic programming systems, mutual relations and mutual implementation of programming paradigms, completeness and efficiency considerations in both fields, as well as related topics.