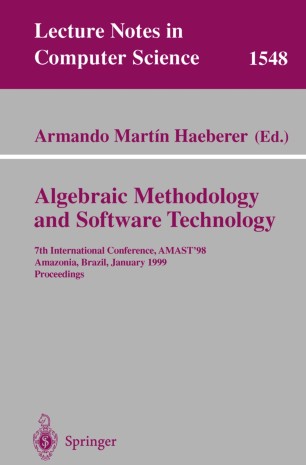 AMAST’s goal is to advance awareness of algebraic and logical methodology as part of the fundamental basis of software technology. Ten years and seven conferences after the start of the AMAST movement, I believe we are attaining this. The movement has propagated throughout the world, assembling many enthusiastic specialists who have participated not only in the conferences, which are now annual, but also in the innumerable other activities that AMAST promotes and supports. We are now facing the Seventh International Conference on Algebraic Methodology and Software Technology (AMAST’98). The previous meetings were held in Iowa City, USA (1989 and 1991), in Enschede, The Netherlands (1993), in Montreal, Canada (1995), in Munich, Germany (1996), and in Sydney, Australia (1997). This time it is Brazil’s turn, in a very special part of this colorful country – Amazonia. Thus, “if we have done more it is by standing on the shoulders of giants.” The effort started by Teodor Rus, Arthur Fleck, and William A. Kirk at AMAST’89 was consolidated in AMAST'91 by Teodor Rus, Maurice Nivat, Charles Rattray, and Giuseppe Scollo. Then came modular construction of the building, wonderfully carried out by Giuseppe Scollo, Vangalur Alagar, Martin Wirsing, and Michael Johnson, as Program Chairs of the AMAST conferences held between 1993 and 1997.