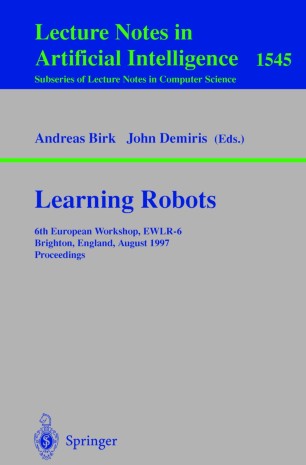 Robot learning is a broad and interdisciplinary area. This holds with regard to the basic interests and the scienti c background of the researchers involved, as well as with regard to the techniques and approaches used. The interests that motivate the researchers in this eld range from fundamental research issues, such as how to constructively understand intelligence, to purely application o- ented work, such as the exploitation of learning techniques for industrial robotics. Given this broad scope of interests, it is not surprising that, although AI and robotics are usually the core of the robot learning eld, disciplines like cog- tive science, mathematics, social sciences, neuroscience, biology, and electrical engineering have also begun to play a role in it. In this way, its interdisciplinary character is more than a mere fashion, and leads to a productive exchange of ideas. One of the aims of EWLR-6 was to foster this exchange of ideas and to f- ther boost contacts between the di erent scienti c areas involved in learning robots. EWLR is, traditionally, a \European Workshop on Learning Robots". Nevertheless, the organizers of EWLR-6 decided to open up the workshop to non-European research as well, and included in the program committee we- known non-European researchers. This strategy proved to be successful since there was a strong participation in the workshop from researchers outside - rope, especially from Japan, which provided new ideas and lead to new contacts.