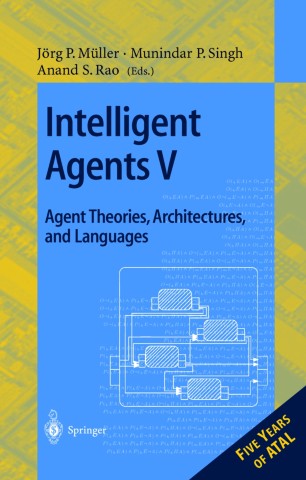 The leading edge of computer science research is notoriously ?ckle. New trends come and go with alarming and unfailing regularity. In such a rapidly changing ?eld, the fact that research interest in a subject lasts more than a year is worthy of note. The fact that, after ?ve years, interest not only remains, but actually continues to grow is highly unusual. As 1998 marked the ?fth birthday of the International Workshop on Agent Theories, Architectures, and Languages (ATAL), it seemed appropriate for the organizers of the original workshop to comment on this remarkable growth, and re ect on how the ?eld has developed and matured. The ?rst ATAL workshop was co-located with the Eleventh European Conference on Arti?cial Intelligence (ECAI-94), which was held in Amsterdam. The fact that we chose an AI conference to co-locate with is telling: at that time, we expected most researchers with an interest in agents to come from the AI community. The workshop, whichwasplannedoverthesummerof1993,attracted32submissions,andwasattended by 55 people.ATAL was the largest workshop at ECAI-94, and the clear enthusiasm on behalfofthecommunitymadethedecisiontoholdanotherATALworkshopsimple.The ATAL-94proceedingswereformallypublishedinJanuary1995underthetitleIntelligent Agents, and included an extensive review article, a glossary, a list of key agent systems, and — unusually for the proceedings of an academic workshop — a full subject index. Thehighscienti?candproductionvaluesembodiedbytheATAL-94proceedingsappear to have been recognized by the community, and resulted inATAL proceedings being the most successful sequence of books published in Springer-Verlag s Lecture Notes in Arti?cial Intelligence series.