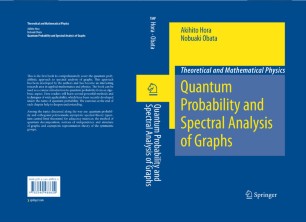 This is the first book to comprehensively cover the quantum probabilistic approach to spectral analysis of graphs. This approach has been developed by the authors and has become an interesting research area in applied mathematics and physics. The book can be used as a concise introduction to quantum probability from an algebraic aspect. Here readers will learn several powerful methods and techniques of wide applicability, which have been recently developed under the name of quantum probability. The exercises at the end of each chapter help to deepen understanding.

Among the topics discussed along the way are: quantum probability and orthogonal polynomials; asymptotic spectral theory (quantum central limit theorems) for adjacency matrices; the method of quantum decomposition; notions of independence and structure of graphs; and asymptotic representation theory of the symmetric groups.

"It is a very accessible introduction for the non expert to a few rapidly evolving areas of mathematics such as spectral analysis of graphs … . this monograph seems to be the first publication providing a synthesis of a very vast mathematical literature in these areas by giving to the reader a concise and self contained panorama of existing results … . this book is important to the quantum probability community and emphasizes well many new applications of quantum probability to other areas of mathematics." (Benoit Collins, Zentralblatt MATH, Vol. 1141, 2008)