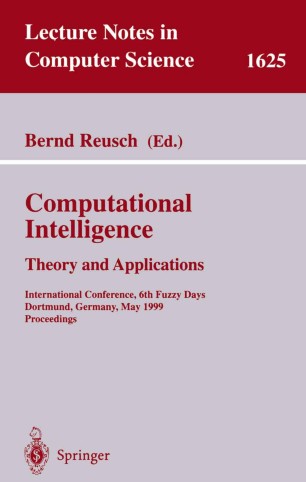 Fuzzy Days in Dortmund were held for the first time in 1991. Initially, the con­ ference was intended for scientists and practitioners as a platform for discussions on theory and application of fuzzy logic. Early on, synergetic links with neural networks were included and the conference evolved gradually to embrace the full spectrum of what is now called Computational Intelligence (CI). Therefore, it seemed logical to launch the 4th Fuzzy Days in 1994 as a conference for CI—one of the world's first conferences featuring fuzzy logic, neural networks and evolu­ tionary algorithms together in one event. Following this successful tradition, the 6th Fuzzy Days' aim is to provide an international forum for reporting significant results on the theory and application of Cl-methods. Once again, we have received a remarkable number of papers. I would like to express my gratitude to all who have been interested in presenting their work within the framework of this conference and to the members of the programme committee for their valuable work (in this edition each paper was reviewed by five referees). In particular, I wish to thank all keynote and tutorial speakers for their commitment. Last but not least, I am obliged to the Deutsche Forschun- gemeinschaft and Kommunalverband Ruhrgebiet for their financial support.