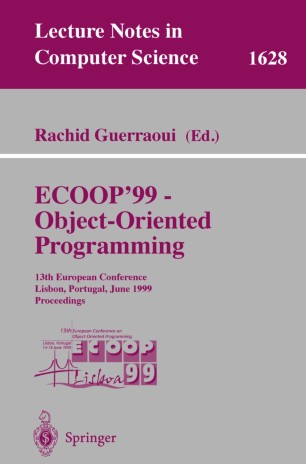 \My tailor is Object-Oriented". Most software systems that have been built - cently are claimed to be Object-Oriented. Even older software systems that are still in commercial use have been upgraded with some OO ?avors. The range of areas where OO can be viewed as a \must-have" feature seems to be as large as the number of elds in computer science. If we stick to one of the original views of OO, that is, to create cost-e ective software solutions through modeling ph- ical abstractions, the application of OO to any eld of computer science does indeed make sense. There are OO programming languages, OO operating s- tems, OO databases, OO speci cations, OO methodologies, etc. So what does a conference on Object-Oriented Programming really mean? I honestly don’t know. What I do know is that, since its creation in 1987, ECOOP has been attracting a large number of contributions, and ECOOP conferences have ended up with high-quality technical programs, featuring interesting mixtures of theory and practice. Among the 183 initial submissions to ECOOP’99, 20 papers were selected for inclusion in the technical program of the conference. Every paper was reviewed by three to ve referees. The selection of papers was carried out during a t- day program committee meeting at the Swiss Federal Institute of Technology in Lausanne. Papers were judged according to their originality, presentation qu- ity, and relevance to the conference topics.