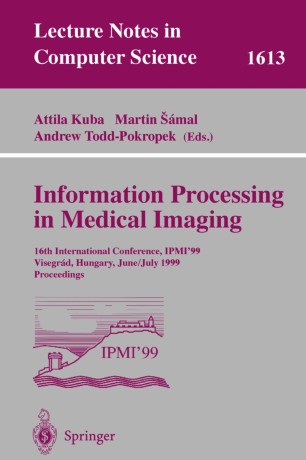 The 1999 international conference on Information Processing in Medical Imaging (IPMI ’99) was the sixteenth in the series of biennial meetings and followed the successful meeting in Poultney, Vermont, in 1997. This year, for the rst time, the conference was held in central Europe, in the historical Hungarian town of Visegr ad, one of the most beautiful spots not only on the Danube Bend but in all Hungary. The place has many historical connections, both national and international. The castle was once a royal palace of King Matthias. In the middle ages, the Hungarian, Czech, and Polish kings met here. Recently, after the summit meeting of reestablished democracies in the area, it became a symbol for the cooperation between central European countries as they approached the European Union. It was thus also symbolic to bring IPMI, in the year of the 30th anniversary of its foundation, to this place, and organize the meeting with the close cooperation of local and traditional western organizers. It also provided a good opportunity to summarize brie?y a history of IPMI for those who were new to the IPMI conference. This year we received 82 full paper submissions from all over the world. Of these, 24 were accepted as oral presentations. These were divided into 6 sessions. In spite of our e orts, it was found to be impossible to make these sessions fully balanced and homogeneous.