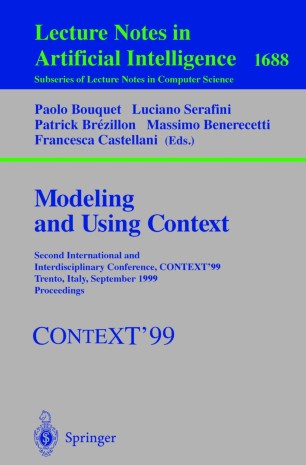 CONTEXT: International and Interdisciplinary Conference on Modeling and Using Context

This volume contains the papers presented at the Second International and - terdisciplinary Conference on Modeling and Using Context (CONTEXT’99), held in Trento (Italy) from 9 to 11 September 1999. CONTEXT’99 is the second in the CONTEXT series. The rst was held in Rio de Janeiro (Brazil) in 1997. The CONTEXT conference series is meant to provide an interdisciplinary - rum where researchers can exchange ideas, methodologies, and results on c- text, and is increasingly becoming an important reference for all people doing research on context. This is testi ed by the larger number of research areas that are represented at CONTEXT’99 (in particular, Philosophy and Cognitive Psychology were not signi cantly present at the rst conference), and by the number and quality of submitted papers. Speci cally, we received 118 papers, mostly of good or excellent quality. Among them, 33 (28%) have been accepted as full papers, and 21 as short papers. We think it is fair to say that the 54 papers collected in this volume provide a signi cant picture of the international research on context currently going on. The notion of context plays an important role in many areas, both theoretical and applied, such as Formal Logic, Arti cial Intelligence, Philosophy, Pragm- ics, Computational Linguistics, Computer Science, Cognitive Psychology.