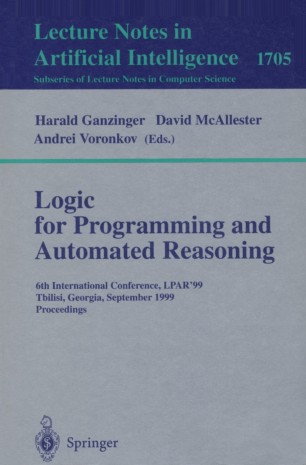 Logic for Programming and Automated Reasoning

This volume contains the papers presented at the Sixth International Conference on Logic for Programming and Automated Reasoning (LPAR'99), held in Tbilisi, Georgia, September 6-10, 1999, and hosted by the University of Tbilisi. Forty-four papers were submitted to LPAR'99. Each of the submissions was reviewed by three program committee members and an electronic program com­ mittee meeting was held via the Internet. Twenty-three papers were accepted. We would like to thank the many people who have made LPAR'99 possible. We are grateful to the following groups and individuals: to the program committee and the additional referees for reviewing the papers in a very short time, to the organizing committee, and to the local organizers of the INTAS workshop in Tbilisi in April 1994 (Khimuri Rukhaia, Konstantin Pkhakadze, and Gela Chankvetadze). And last but not least, we would like to thank Konstantin - rovin, who maintained the program committee Web page; Uwe Waldmann, who supplied macros for these proceedings and helped us to install some programs for the electronic management of the program committee work; and Bill McCune, who implemented these programs.