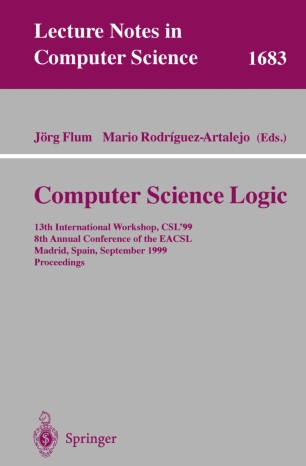 The 1999 Annual Conference of the European Association for Computer Science Logic, CSL’99, was held in Madrid, Spain, on September 20-25, 1999. CSL’99 was the 13th in a series of annual meetings, originally intended as Internat- nal Workshops on Computer Science Logic, and the 8th to be held as the - nual Conference of the EACSL. The conference was organized by the Computer Science Departments (DSIP and DACYA) at Universidad Complutense in M- rid (UCM). The CSL’99 program committee selected 34 of 91 submitted papers for p- sentation at the conference and publication in this proceedings volume. Each submitted paper was refereed by at least two, and in almost all cases, three di erent referees. The second refereeing round, previously required before a - per was accepted for publication in the proceedings, was dropped following a decision taken by the EACSL membership meeting held during CSL’98 (Brno, Czech Republic, August 25, 1998).