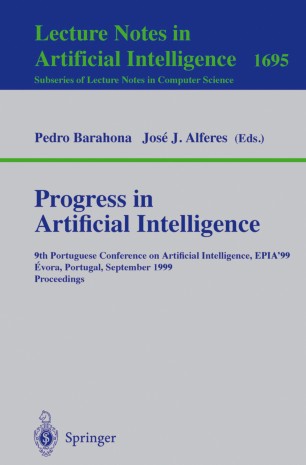 The Portuguese Association for Arti cial Intelligence (APPIA) has been re- larly organising the Portuguese Conference on Arti cial Intelligence (EPIA). This ninth conference follows previous ones held in Porto (1985), Lisboa (1986), Braga (1987), Lisboa (1989), Albufeira (1991), Porto (1993), Funchal (1995) and Coimbra (1997). Starting in 1989, the conferences have been held biennially (alternating with an APPIA Advanced School on Arti cial Intelligence) and become truly international: English has been adopted as the o cial language and the proceedings are published in Springer’s LNAI series. The conference has recon rmed its high international standard this year, largely due to its programme committee, composed of distinguished researchers in a variety of specialities in Arti cial Intelligence, half of them from Portuguese universities. This has attracted a signi cant international interest, well expressed by the number of papers submitted (66), from 17 di erent countries, 29 of which are by Portuguese researchers. From the 66 papers submitted, about one third of them (23) were selected for oral presentation and have been published in this volume. The review process enabled the selection of high quality papers, each paper being reviewed by two or three reviewers, either from the programme committee or by their appointment. We would like to thank all of the reviewers for their excellent and hard work.