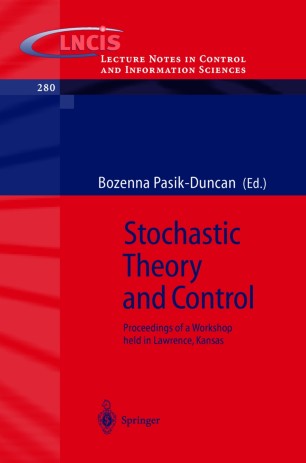 Proceedings of a Workshop held in Lawrence, Kansas

This volume contains almost all of the papers that were presented at the Workshop on Stochastic Theory and Control that was held at the Univ- sity of Kansas, 18–20 October 2001. This three-day event gathered a group of leading scholars in the ?eld of stochastic theory and control to discuss leading-edge topics of stochastic control, which include risk sensitive control, adaptive control, mathematics of ?nance, estimation, identi?cation, optimal control, nonlinear ?ltering, stochastic di?erential equations, stochastic p- tial di?erential equations, and stochastic theory and its applications. The workshop provided an opportunity for many stochastic control researchers to network and discuss cutting-edge technologies and applications, teaching and future directions of stochastic control. Furthermore, the workshop focused on promoting control theory, in particular stochastic control, and it promoted collaborative initiatives in stochastic theory and control and stochastic c- trol education. The lecture on “Adaptation of Real-Time Seizure Detection Algorithm” was videotaped by the PBS. Participants of the workshop have been involved in contributing to the documentary being ?lmed by PBS which highlights the extraordinary work on “Math, Medicine and the Mind: Discovering Tre- ments for Epilepsy” that examines the e?orts of the multidisciplinary team on which several of the participants of the workshop have been working for many years to solve one of the world’s most dramatic neurological conditions. Invited high school teachers of Math and Science were among the part- ipants of this professional meeting.