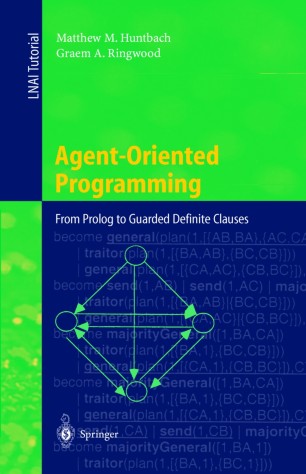 From Prolog to Guarded Definite Clauses

A book that furnishes no quotations is, me judice, no book – it is a plaything. TL Peacock: Crochet Castle The paradigm presented in this book is proposed as an agent programming language. The book charts the evolution of the language from Prolog to intelligent agents. To a large extent, intelligent agents rose to prominence in the mid-1990s because of the World Wide Web and an ill-structured network of multimedia information. Age- oriented programming was a natural progression from object-oriented programming which C++ and more recently Java popularized. Another strand of influence came from a revival of interest in robotics [Brooks, 1991a; 1991b]. The quintessence of an agent is an intelligent, willing slave. Speculation in the area of artificial slaves is far more ancient than twentieth century science fiction. One documented example is found in Aristotle’s Politics written in the fourth century BC. Aristotle classifies the slave as “an animate article of property”. He suggests that slaves or subordinates might not be necessary if “each instrument could do its own work at command or by anticipation like the statues of Daedalus and the tripods of Hephaestus”. Reference to the legendary robots devised by these mythological technocrats, the former an artificer who made wings for Icarus and the latter a blacksmith god, testify that the concept of robot, if not the name, was ancient even in Aristotle’s time.