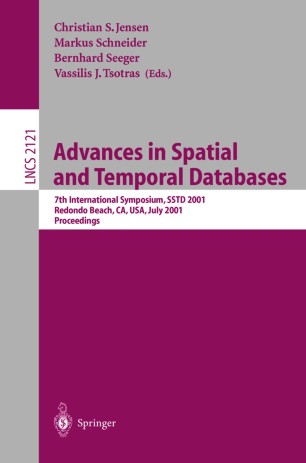 Advances in Spatial and Temporal Databases

The Seventh International Symposium on Spatial and Temporal Databases (SSTD 2001), held in Redondo Beach, CA, USA, July 12{15, 2001, brought together leading researchers and developers in the area of spatial, temporal, and spatio-temporal databases to discuss the state of the art in spatial and temporal data management and applications, and to understand the challenges and - search directions in the advancing area of data management for moving objects. The symposium served as a forum for disseminating research in spatial and temporal data management, and for maximizing the interchange of knowledge among researchers from the established spatial and temporal database com- nities. The exchange of research ideas and results not only contributes to the academic arena, but also bene ts the user and commercial communities. SSTD 2001 was the seventh in the series of symposia that started in Santa Barbara a dozen years ago and has since been held every two years, in Zurich, Singapore, Portland (Maine), Berlin, and Hong Kong. By 1999, the series had become well established as the premier international forum devoted solely to spatial database management, and it was decided to extend the scope of the series to also cover temporal database management. This extended scope was chosen due, in part, to the increasing importance of research that considers spatial and temporal aspects jointly.