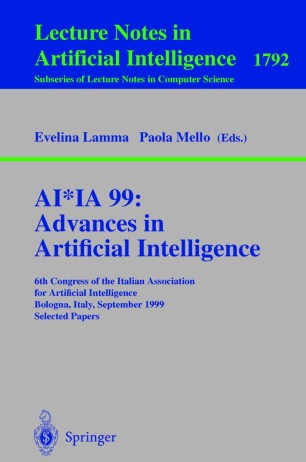 AI*IA: Congress of the Italian Association for Artificial Intelligence

This book contains the extended versions of 33 papers selected among those originally presented at the Sixth Congress of the Italian Association for Artificial Intelligence (AI*IA). The congress of the AI*IA is the most relevant Italian event in the field of Artificial Intelligence, and has been receiving much attention from many researchers and practitioners of different countries. The sixth congress was held in Bologna, 14-17 September 1999, and was organized in twelve scientific sessions and one demo session. The papers here collected report on significant work carried out in different areas of artificial intelligence, in Italy and other countries. Areas such as automated reasoning, knowledge representation, planning, and machine learning continue to be thoroughly investigated. The collection also shows a growing interest in the field of multi-agent systems, perception and robotics, and temporal reasoning. Many people contributed in different ways to the success of the congress and to this volume. First of all, the members of the program committee who efficiently handled the reviewing of the 64 papers submitted to the congress, and later on the reviewing of the 41 papers submitted for publication in this volume. They provided three reviews for each manuscript, by relying on the support of valuable additional reviewers. The members of the organizing committee, namely Rosangela Barruffi, Paolo Bellavista, Anna Ciampolini, Marco Cremonini, Enrico Denti, Marco Gavanelli, Mauro Gaspari, Michela Milano, Rebecca Montanari, Andrea Omicini, Fabrizio Riguzzi, Cesare Stefanelli, and Paolo Torroni, worked hardy supporting at solving problems during and after the congress.