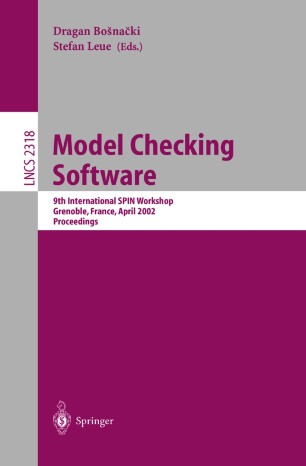 The SPIN workshop series brings together researchers and practitioners int- ested in explicit state model checking technology as it is applied to the veri?- tion of software systems. Since 1995, when the SPIN workshop series was instigated, SPIN workshops have been held on an annual basis at Montr´ eal (1995), New Brunswick (1996), Enschede (1997), Paris (1998), Trento (1999), Toulouse (1999), Stanford (2000), andToronto(2001). Whilethe?rstSPINworkshopwasastand-aloneevent,later workshopshavebeenorganizedasmoreorlesscloselya?liatedeventswithlarger conferences, in particular with CAV (1996), TACAS (1997), FORTE/PSTV (1998), FLOC (1999), World Congress on Formal Methods (1999), FMOODS (2000), and ICSE (2001). This year, SPIN 2002 was held as a satellite event of ETAPS 2002, the European Joint Conferences on Theory and Practice of Software. The co-location of SPIN workshops with conferences has proven to be very successful and has helped to disseminate SPIN model checking technology to wider audiences. Since 1999, the proceedings of the SPIN workshops have appeared in Springer-Verlag’s “Lecture Notes in Computer Science” series. The history of successful SPIN workshops is evidence for the maturing of model checking technology, not only in the hardware domain, but increasingly also in the software area. While in earlier years algorithms and tool development 1 around the SPIN model checker were the focus of this workshop series, the scopehasrecentlywidenedtoincludemoregeneralapproachestosoftwaremodel checking. Current research in this area concentrates not so much on completely verifyingsystemmodels,butratheronanalyzingsourcecodeinordertodiscover software faults.