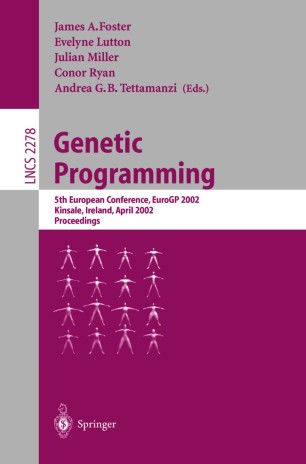 Thisvolumerecordstheproceedingsofthe?fthEuropeanconferenceonGenetic Programming(EuroGP2002)whichtookplaceinKinsale,IrelandonApril3–5, 2002, continuing an established tradition of yearly meetings among the most prominent researchers on Genetic Programming in Europe and beyond; their proceedings have always been published in the LNCS series by Springer-Verlag. EuroGP began life in Paris in 1998 as an international workshop (April 14– 15, LNCS 1391); a second workshop took place in G¨ oteborg in 1999 (May 26– 27, LNCS 1598). Its ?rst appearance as a conference was in the year 2000 in Edinburgh (April 15–16, LNCS 1802), followed by last year’s conference held at Lake Como (April 18–19, LNCS 2038). Since the beginning, EuroGP has been co-located with a series of specialist workshops on applications of evolutionary algorithms (LNCS 1468, 1596, 1803, and 2037). In keeping with that tradition, the EvoWorkshops were also held in Kinsale this year at the same time (LNCS 2279). Genetic Programming (GP) is a branch of Evolutionary Computation in which populations of computer programs are made to evolve and adapt to so- ing a particular problem or task by a process that draws its inspiration from Biology and Darwinian evolution. GP is a very versatile technique, which has been applied to a wide range of tasks, as a quick inspection of the 32 papers in these proceedings will easily reveal: economics, robotics, engineering, statistics, pharmacology,electronics,and?nancearebutsomeofthedomainsinwhichthey havebeenemployed.AlthoughtherateofapplicationofGPtoproblemsisst- dily growing, this conference is characterized by its concern with the theoretical foundations of GP: investigation of these issues is attaining an ever increasing depth and maturity.