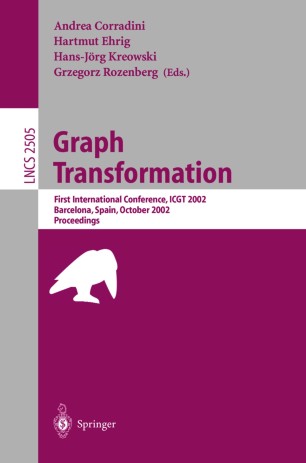 ICGT 2002 was the ?rst International Conference on Graph Transformation following a series of six international workshops on graph grammars with - plications in computer science, held in Bad Honnef (1978), Osnabruc ¨ k (1982), Warrenton (1986), Bremen (1990), Williamsburg (1994), and Paderborn (1998). ICGT 2002 was held in Barcelona (Spain), October 7–12, 2002 under the a- pices of the European Association of Theoretical Computer Science (EATCS), the European Association of Software Science and Technology (EASST), and the IFIP Working Group 1.3, Foundations of Systems Speci?cation. The scope of the conference concerned graphical structures of various kinds (like graphs, diagrams, visual sentences and others) that are useful to describe complex structures and systems in a direct and intuitive way. These structures are often augmented by formalisms which add to the static description a further dimension, allowing for the modeling of the evolution of systems via all kinds of transformations of such graphical structures. The ?eld of Graph Transformation is concerned with the theory, applications, and implementation issues of such formalisms. The theory is strongly related to areas such as graph theory and graph - gorithms, formal language and parsing theory, the theory of concurrent and distributed systems, formal speci?cation and veri?cation, logic, and semantics.