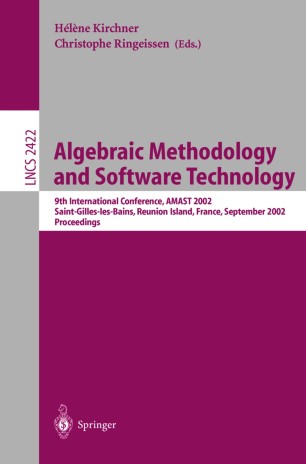 This volume contains the proceedings of AMAST 2002, the 9th International Conference on Algebraic Methodology and Software Technology, held during September 9–13, 2002, in Saint-Gilles-les-Bains, R´eunion Island, France. The major goal of the AMAST conferences is to promote research that may lead to setting software technology on a ?rm mathematical basis. This goal is achieved through a large international cooperation with contributions from both academia and industry. Developing a software technology on a mathematical basis p- duces software that is: (a) correct, and the correctness can be proved mathem- ically, (b) safe, so that it can be used in the implementation of critical systems, (c) portable, i. e. , independent of computing platforms and language generations, (d) evolutionary, i. e. , it is self-adaptable and evolves with the problem domain. All previous AMAST conferences, which were held in Iowa City (1989, 1991), Twente (1993), Montreal (1995), Munich (1996), Sydney (1997), Manaus (1999), and Iowa City (2000), made contributions to the AMAST goals by reporting and disseminating academic and industrial achievements within the AMAST area of interest. During these meetings, AMAST attracted an international following among researchers and practitioners interested in software technology, progr- ming methodology, and their algebraic, and logical foundations.