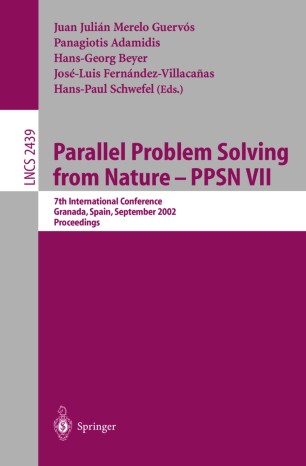 We are proud to introduce the proceedings of the Seventh International C- ference on Parallel Problem Solving from Nature, PPSN VII, held in Granada, Spain, on 7–11 September 2002. PPSN VII was organized back-to-back with the Foundations of Genetic Algorithms (FOGA) conference, which took place in Torremolinos, Malaga, Spain, in the preceding week. ThePPSNseriesofconferencesstartedinDortmund,Germany[1].Fromthat pioneering meeting, the event has been held biennially, in Brussels, Belgium [2], Jerusalem, Israel [3], Berlin, Germany [4], Amsterdam, The Netherlands [5], and Paris, France [6]. During the Paris conference, several bids to host PPSN 2002 were put forward; it was decided that the conference would be held in Granada with Juan J. Merelo Guerv´ os as General Chairman. The scienti?c content of the PPSN conference focuses on problem-solving paradigms gleaned from natural models, with an obvious emphasis on those that display an innate parallelism, such as evolutionary algorithms and ant-colony optimization algorithms. The majority of the papers, however, concentrate on evolutionary and hybrid algorithms, as is shown in the contents of this book and itspredecessors.Thiseditionoftheconferenceproceedingshasalargesectionon applications,betheytoclassicalproblemsortoreal-worldengineeringproblems, which shows how bioinspired algorithms are extending their use in the realms of business and enterprise.