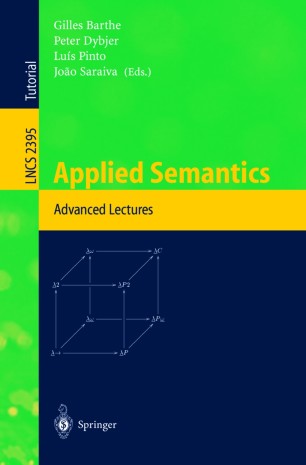 This book is based on material presented at the international summer school on Applied Semantics that took place in Caminha, Portugal, in September 2000. We aim to present some recent developments in programming language research, both in semantic theory and in implementation, in a series of graduate-level lectures. The school was sponsored by the ESPRIT Working Group 26142 on Applied Semantics(APPSEM),whichoperatedbetweenApril1998andMarch2002.The purpose of this working group was to bring together leading reseachers, both in semantic theory and in implementation, with the speci?c aim of improving the communication between theoreticians and practitioners. TheactivitiesofAPPSEMwerestructuredintonineinterdisciplinarythemes: A: Semantics for object-oriented programming B: Program structuring C: Integration of functional languages and proof assistants D: Veri?cation methods E: Automatic program transformation F: Games, sequentiality, and abstract machines G: Types and type inference in programming H: Semantics-based optimization I: Domain theory and real number computation These themes were identi?ed as promising for pro?table interaction between semantic theory and practice, and were chosen to contribute to the following general topics: – description of existing programming language features; – design of new programming language features; – implementation and analysis of programming languages; – transformation and generation of programs; – veri?cation of programs. The chapters in this volume give examples of recent developments covering a broad range of topics of interest to APPSEM.