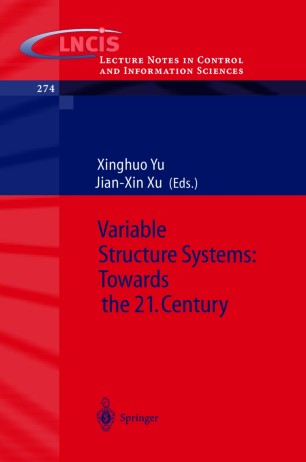 The book is a collection of contributions concerning the theories, applications and perspectives of Variable Structure Systems (VSS). Variable Structure Systems have been a major control design methodology for many decades. The term Variable Structure Systems was introduced in the late 1950’s, and the fundamental concepts were developed for its main branch Sliding Mode Control by Russian researchers Emelyanov and Utkin. The 20th Century has seen the formation and consolidation of VSS theory and its applications. It has also seen an emerging trend of cross-fertilization and integration of VSS with other control and non-control techniques such as feedback linearization, ?atness, passivity based control, adaptive and learning ? control, system identi?cation, pulse width modulation, H geometric and algebraic methods, arti?cial intelligence, modeling and optimization, neural networks, fuzzy logic, to name just a few. This trend will continue and ?ourish in the new millennium. To re?ect these major developments in the 20th Century, this book - cludes 16 specially invited contributions from well-known experts in VSS theory and applications, covering a wide range of topics. The ?rst chapter, “First Stage of VSS: People and Events” written by Vadim Utkin, the founder of VSS, oversees and documents the historical developments of VSS in the 20th Century, including many interesting events not known to the West until now. The second chapter, “An Integrated Learning Variable Structure Control Method” written by Jian-Xin Xu, addresses an important issue regarding control integration between variable structure control and learning control.