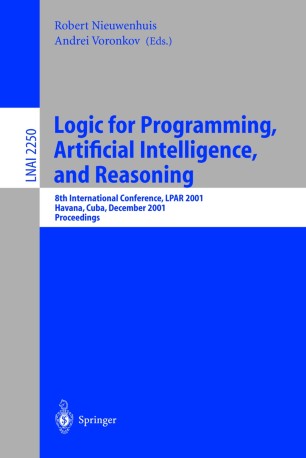 This volume contains the papers presented at the Eighth International C- ference on Logic for Programming, Arti?cial Intelligence and Reasoning (LPAR 2001), held on December 3-7, 2001, at the University of Havana (Cuba), together with the Second International Workshop on Implementation of Logics. There were 112 submissions, of which 19 belonged to the special subm- sion category of experimental papers, intended to describe implementations or comparisons of systems, or experiments with systems. Each submission was - viewed by at least three program committee members and an electronic program committee meeting was held via the Internet. The high number of submissions caused a large amount of work, and we are very grateful to the other 31 PC members for their e?ciency and for the quality of their reviews and discussions. Finally, the committee decided to accept 40papers in the theoretical ca- gory, and 9 experimental papers. In addition to the refereed papers, this volume contains an extended abstract of the invited talk by Frank Wolter. Two other invited lectures were given by Matthias Baaz and Manuel Hermenegildo. Apart from the program committee, we would also like to thank the other people who made LPAR 2001 possible: the additional referees; the Local Arran- ` gements Chair Luciano Garc´?a; Andr´es Navarro and Oscar Guell, ¨ who ran the internet-based submission software and the program committee discussion so- ware at the LSI Department lab in Barcelona; and Bill McCune, whose program committee management software was used.