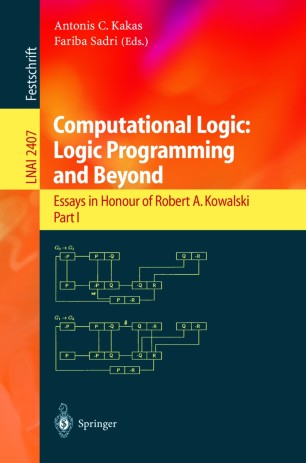 Computational Logic: Logic Programming and Beyond

Essays in Honour of Robert A. Kowalski Part I

Alan Robinson This set of essays pays tribute to Bob Kowalski on his 60th birthday, an anniversary which gives his friends and colleagues an excuse to celebrate his career as an original thinker, a charismatic communicator, and a forceful intellectual leader. The logic programming community hereby and herein conveys its respect and thanks to him for his pivotal role in creating and fostering the conceptual paradigm which is its raison d’Œtre. The diversity of interests covered here reflects the variety of Bob’s concerns. Read on. It is an intellectual feast. Before you begin, permit me to send him a brief personal, but public, message: Bob, how right you were, and how wrong I was. I should explain. When Bob arrived in Edinburgh in 1967 resolution was as yet fairly new, having taken several years to become at all widely known. Research groups to investigate various aspects of resolution sprang up at several institutions, the one organized by Bernard Meltzer at Edinburgh University being among the first. For the half-dozen years that Bob was a leading member of Bernard’s group, I was a frequent visitor to it, and I saw a lot of him. We had many discussions about logic, computation, and language.