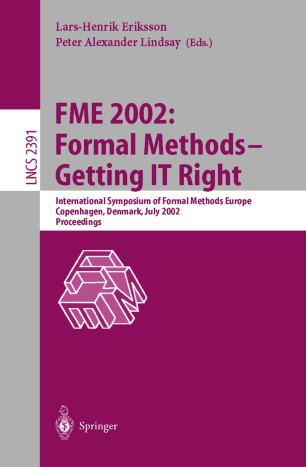 This volume contains the proceedings of the 2002 symposium Formal Methods th Europe (FME 2002). The symposium was the 11 in a series that began with a VDM Europe symposium in 1987. The symposia are traditionally held every 18 months. In 2002 the symposium was held at the University of Copenhagen, as part of the 2002 Federated Logic Conference (FLoC 2002), which brought - gether in one event seven major conferences related to logic in computer science, as well as their a?liated workshops, tutorials, and tools exhibitions. Formal Methods Europe (www.fmeurope.org) is an independent association which aims to stimulate the use of, and research on, formal methods for software development. FME symposia have been notably successful in bringing together a community of users, researchers, and developers of precise mathematical - thods for software development. The theme of FME 2002 was “Formal Methods: Getting IT Right”. The double meaning was intentional. On the one hand, the theme acknowledged the signi?cant contribution formal methods can make to Information Technology, by enabling computer systems to be described precisely and reasoned about with rigour. On the other hand, it recognized that current formal methods are not perfect, and further research and practice are required to improve their foundations, applicability, and e?ectiveness.