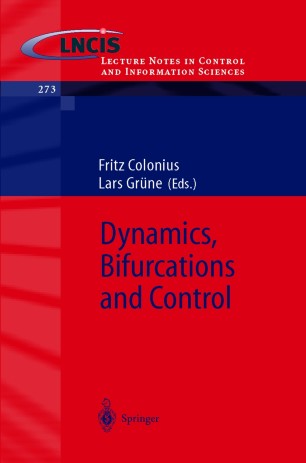 This volume originates from the Third Nonlinear Control Workshop "- namics, Bifurcations and Control", held in Kloster Irsee, April 1-3 2001. As the preceding workshops held in Paris (2000) and in Ghent (1999), it was organized within the framework of Nonlinear Control Network funded by the European Union (http://www.supelec.fr/lss/NCN). The papers in this volume center around those control problems where phenomena and methods from dynamical systems theory play a dominant role. Despite the large variety of techniques and methods present in the c- tributions, a rough subdivision can be given into three areas: Bifurcation problems, stabilization and robustness, and global dynamics of control s- tems. A large part of the fascination in nonlinear control stems from the fact that is deeply rooted in engineering and mathematics alike. The contributions to this volume reflect this double nature of nonlinear control. We would like to take this opportunity to thank all the contributors and the referees for their careful work. Furthermore, it is our pleasure to thank Franchise Lamnabhi-Lagarrigue, the coordinator of our network, for her s- port in organizing the workshop and the proceedings and for the tremendous efforts she puts into this network bringing the cooperation between the d- ferent groups to a new level. In particular, the exchange and the active p- ticipation of young scientists, also reflected in the Pedagogical Schools within the Network, is an asset for the field of nonlinear control.