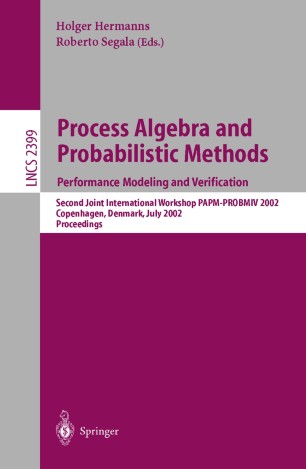 This volume contains the proceedings of the second joint PAPM-PROBMIV Workshop, held at the University of Copenhagen, Denmark, July 25–26, 2002 as part of the Federated Logic Conference (FLoC 2002). The PAPM-PROBMIV workshop results from the combination of two wo- shops: PAPM (Process Algebras and Performance Modeling) and PROBMIV (Probabilistic Methods in Veri?cation). The aim of the joint workshop is to bring together the researchers working across the whole spectrum of techniques for the modeling, speci?cation, analysis, and veri?cation of probabilistic systems. Probability is widely used in the design and analysis of software and hardware systems, as a means to derive e?cient algorithms (e.g. randomization), as a model for unreliable or unpredictable behavior (as in the study of fault-tolerant systems and computer networks), and as a tool to study performance and - pendability properties. The topics of the workshop include speci?cation, m- els, and semantics of probabilistic systems, analysis and veri?cation techniques, probabilistic methods for the veri?cation of non-probabilistic systems, and tools and case studies. The ?rst PAPM workshop was held in Edinburgh in 1993; the following ones were held in Regensberg (1994), Edinburgh (1995), Turin (1996), Enschede (1997), Nice (1998), Zaragoza (1999), and Geneva (2000). The ?rst PROBMIV workshop was held in Indianapolis, Indiana (1998); the next one took place in Eindhoven (1999). In 2000, PROBMIV was replaced by a Dagstuhl seminar on Probabilistic Methods in Veri?cation.