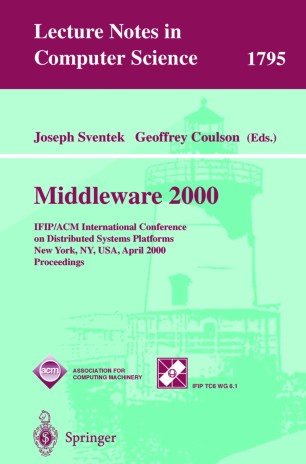 Middleware is everywhere. Ever since the advent of sockets and other virtu- circuit abstractions, researchers have been looking for ways to incorporate high- value concepts into distributed systems platforms. Most distributed applications, especially Internet applications, are now programmed using such middleware platforms. Prior to 1998, there were several major conferences and workshops at which research into middleware was reported, including ICODP (International C- ference on Open Distributed Processing), ICDP (International Conference on Distributed Platforms) and SDNE (Services in Distributed and Networked - vironments). Middleware’98was a synthesis of these three conferences. Middleware 2000 continued the excellent tradition of Middleware’98. It p- vided a single venue for reporting state-of-the-art results in the provision of distributed systems platforms. The focus of Middleware 2000 was the design, implementation, deployment, and evaluation of distributed systems platforms and architectures for future networked environments. Among the 70 initial submissions to Middleware 2000, 21 papers were - lected for inclusion in the technical program of the conference. Every paper was reviewed by four members of the program committee. The papers were judged - cording to their originality, presentation quality, and relevance to the conference topics. The accepted papers cover various subjects such as caching, re?ection, quality of service, and transactions.