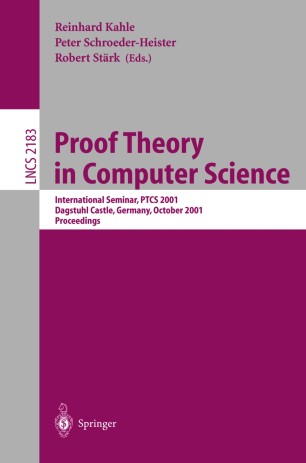 Proof theory has long been established as a basic discipline of mathematical logic. It has recently become increasingly relevant to computer science. The - ductive apparatus provided by proof theory has proved useful for metatheoretical purposes as well as for practical applications. Thus it seemed to us most natural to bring researchers together to assess both the role proof theory already plays in computer science and the role it might play in the future. The form of a Dagstuhl seminar is most suitable for purposes like this, as Schloß Dagstuhl provides a very convenient and stimulating environment to - scuss new ideas and developments. To accompany the conference with a proc- dings volume appeared to us equally appropriate. Such a volume not only ?xes basic results of the subject and makes them available to a broader audience, but also signals to the scienti?c community that Proof Theory in Computer Science (PTCS) is a major research branch within the wider ?eld of logic in computer science.