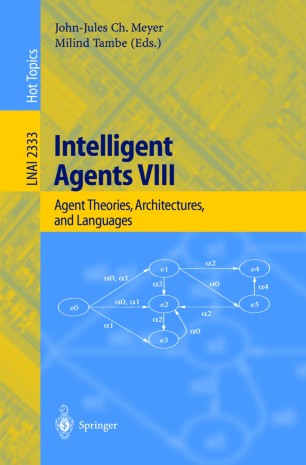 This volume is the eighth in the Intelligent Agents series associated with the ATAL workshops. These workshops on “Agent Theories, Architectures, and L- guages” have established themselves as a tradition, and play the role of small but internationally well-known conferences on the subject, where besides theory per se also integration of theory and practice is in focus. Speci?cally, ATAL - dresses issues of theories of agency, software architectures for intelligent agents, methodologies and programming languages for realizing agents, and software tools for applying and evaluating agent-based systems. ATAL 2001 featured two special tracks in which both the more theoretical / formal and the more practical aspects were present, viz. “Formal Theories of Negotiation”, organized by Frank Dignum, and “Agents for Hand-Held, Mobile, or Embedded Devices”, organized by Tim Finin. There was also an extra session on RoboCup Rescue, organized and presented by Satoshi Tadokoro and Ranjit Nair. ATAL 2001 attracted 68 papers from over 20 countries all over the world, of which 30 were selected for presentation at the workshop and publication in this volume. We invited two outstanding speakers: Fausto Giunchiglia (Trento, Italy) and Tom Dean (Brown, USA).