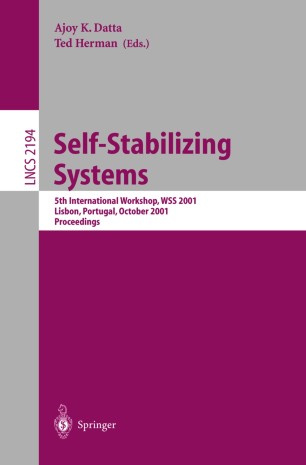 Physicalsystemswhichrightthemselvesafterbeingdisturbedevokeourcuriosity becausewe wantto understand howsuchsystemsareableto reactto unexpected stimuli. Themechanismsareallthe morefascinatingwhensystemsarecomposed of small, simple units, and the ability of the system to self-stabilize emerges out of its components. Faithful computer simulations of such physical systems exhibit the self-stabilizing property, but in the realm of computing, particularly for distributed systems, wehavegreaterambition. We imaginethat all manner of software, ranging from basic communication protocols to high-level applications, could enjoy self-corrective properties. Self-stabilizing software o?ers a unique, non-traditional approach to the c- cial problem of transient fault tolerance. Many successful instances of modern fault-tolerant networks are based on principles of self-stabilization. Surprisingly, the most widely accepted technical de?nition of a self-stabilizing system does not refer to faults: it is the property that the system can be started in any i- tial state, possibly an “illegal state,” and yet the system guarantees to behave properly in ?nite time. This, and similar de?nitions, break many traditional approaches to program design, in which the programmer by habit makes - sumptions about initial conditions. The composition of self-stabilizing systems, initially seen as a daunting challenge, has been transformed into a mana- able task, thanks to an accumulation of discoveries by many investigators. - search on various topics in self-stabilization continues to supply new methods for constructing self-stabilizing systems, determines limits and applicability of the paradigm of self-stabilization, and connects self-stabilization to related areas of fault tolerance and distributed computing.