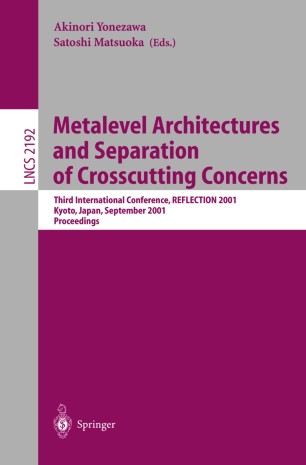 This volume constitutes the proceedings of REFLECTION 2001, the Third Int- national Conference on Metalevel Architectures and Separation of Crosscutting Concerns, which was held in Kyoto, September 25-28, 2001. Metalevel architectures and re?ection have drawn the attention of researchers and practitioners throughout computer science. Re?ective and metalevel te- niques are being used to address real-world problems in such areas as: progr- ming languages, operating systems, databases, distributed computing, expert systems and web computing. Separation of concerns has been a guiding principle of software engineering for nearly 30 years, but its known bene?ts are seldom fully achieved in practice. This is primarily because traditional mechanisms are not powerful enough to handle many kinds of concerns that occur in practice. Over the last 10 years, to overcome the limitations of traditional frameworks, many researchers, including several from the re?ection community, have proposed new approaches. For the ?rst time, papers on advanced approaches to separation of concerns were explicitly solicited. Following the success of previous conferences such as IMSA’92 in Tokyo, Re?ection’96 in San Francisco, and Re?ection’99 in Saint Malo, we hope that the conference provided an excellent forum for researchers with a broad range of interests in metalevel architectures, re?ective techniques, and separation of concerns in general.