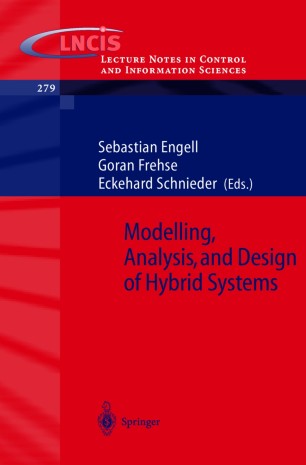 In 1995, the Deutsche Forschungsgemeinschaft (DFG), the largest public research funding organization in Germany, decided to launch a priority program (Schw- punktprogramm in German) calledKondisk– Dynamics and Control of Systems with Mixed Continuous and Discrete Dynamics. Such a priority program is usually sponsored for six years and supports about twenty scientists at a time, in engineering andcomputersciencemostlyyoungresearchersworkingforadoctoraldegree. There is a yearly competition across all disciplines of arts and sciences for the funding of such programs, and the group of proposers was the happy winner of a slot in that year. The program started in 1996 after an open call for proposals; the successful projects were presented and re-evaluated periodically, and new projects could be submitted simultaneously. During the course of the focused research program, 25 different projects were funded in 19 participating university institutes, some of the projects were collaborative efforts of two groups with different backgrounds, mostly one from engineering and one from computer science. There were two main motivations for establishingKondisk. The rst was the fact that technical systems nowadays are composed of physical components with (mostly) continuous dynamics and computerized control systems where the reaction to discrete events plays a major role, implemented in Programmable Logic Contr- lers (PLCs), Distributed Control Systems (DCSs) or real-time computer systems.