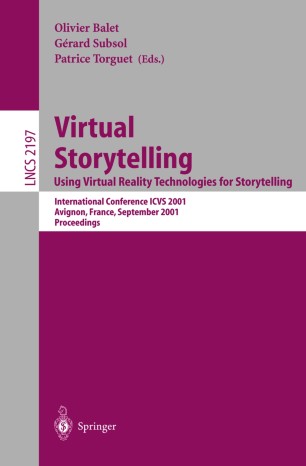 The story is the richest heritage of human civilizations. One can imagine the ?rst stories being told, several thousand centuries ago, by wise old men huddled around camp?res. Since this time, the narrative process has been considerably developed and enriched: sounds and music have been added to complement the speech, while scenery and theatrical sets have been created to enhance the story environment. Actors, dancers, and technicians have replaced the lone storyteller. The story is no longer the sole preserve of oral narrative but can be realized in book, theatrical, dance, or movie form. Even the audience can extend up to several million individuals. And yet in its many forms the story lies at the heart of one of the world’s most important industries. The advent of the digital era has enhanced and accelerated this evolution: image synthesis, digital special e?ects, new Human-Computer interfaces, and the Internet allow one not only to realize more sophisticated narrative forms but also to create new concepts such as video gaming and virtual environments. The art of storytelling is becoming evermore complex. Virtual reality o?ers new tools to capture, and to interactively modify the imaginary environment, in ever more intuitive ways, coupled with a maximum sensory feedback. In fact, virtual reality technologies o?er enhanced and exciting production possibilities for the creation and non-linear manipulation in real time, of almost any story form. This has lead to the new concept of Virtual Storytelling.