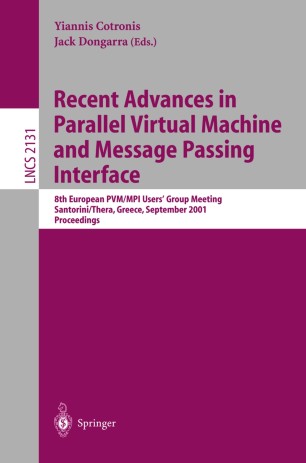 Parallel Virtual Machine (PVM) and Message Passing Interface (MPI) are the most frequently used tools for programming according to the message passing paradigm, which is considered one of the best ways to develop parallel appli- tions. This volume comprises 50 revised contributions presented at the Eighth - ropean PVM/MPI Users’ Group Meeting, which was held on Santorini (Thera), Greece,23–26September2001.TheconferencewasorganizedbytheDepartment of Informatics and Telecommunications, University of Athens, Greece. This conference has been previously held in Balatofured, ¨ Hungary (2000), Barcelona, Spain (1999), Liverpool, UK (1998), and Krakow, Poland (1997). The ?rst three conferences were devoted to PVM and were held at the TU Munich, Germany (1996), the ENS Lyon, France (1995), and the University of Rome (1994). This conference has become a forum for users and developers of PVM, MPI, and other message passing environments. Interaction between these groups has proved to be very useful for developing new ideas in parallel computing and for applying some of those already existent to new practical ?elds. The main topics of the meeting were evaluation and performance of PVM and MPI, extensions and improvements to PVM and MPI, algorithms using the message passing paradigm,andapplicationsinscienceandengineeringbasedonmessagepassing. The conference included one tutorial on MPI and 9 invited talks on advances in MPI, cluster computing, network computing, Grid computing, and parallel programming and programming systems. These proceedings contain papers on the 46 oral presentations together with 4 poster presentations.